Karlsruhe, Germany – June 9, 2016 – joimax®, the global developer and marketer of technologies and treatment methods for minimally invasive endoscopic spinal surgery, recently hosted an educational symposium and exhibit during the 5th World Congress of Minimally Invasive Spine Surgery & Techniques (WCMISST), held June 1-4, in Jeju Island, Korea. The World Congress, which takes place every two years, is attended by more than 500 physicians and is recognized as one of the most important congresses for minimally invasive spine surgery. 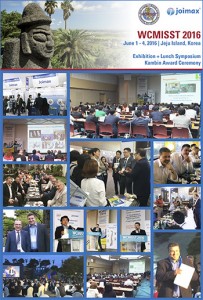 Additionally, joimax® hosted an educational symposium for spine surgeons from across the globe. ”About 200 attendees gathered to learn about the techniques of endoscopic minimally invasive spine surgery and the benefits of these techniques to both the surgeon and their patients,” said Wolfgang Ries, founder and CEO of joimax®. During the Congress’ Gala Dinner, joimax® had the honour of presenting the Parviz Kambin Award to Dr. Guntram Krzok and Dr. Ralf Wagner, both from Germany, for their excellence in endoscopic spinal surgery. The Parviz Kambin Award is presented to pioneers in the field of endoscopic minimally invasive spine surgery. Nominees are selected by SMISS, WCMISST and joimax®.

Dr. Guntram Krzok, owner of a private practice in Friedrichsroda, Germany, has performed more than 3,000 endoscopic and transforaminal surgeries since 1999 and has provided training at 100 workshops. He was the first surgeon to introduce the TESSYS® technique in China and routinely publishes about his growing experience in the field.

Since 2007, Dr. Ralf Wagner, from the Ligamenta Spine Center in Frankfurt, has performed nearly 2,700 endoscopic surgeries with transforaminal, interlaminar and cervical systems, as well as endoscopic assisted stabilization with the joimax® EndoLIF® technique. He, too, has provided training at nearly 100 workshops, is an active speaker at international congresses and has published numerous scientific articles

About joimax®
Founded in in Karlsruhe, Germany, in 2001, joimax® is turning into its 15th year of establishment. joimax® is the leading developer and marketer of complete systems for endoscopic minimally invasive spinal surgery. With TESSYS® (transforaminal), iLESSYS® (interlaminar) and CESSYS® (cervical) for decompression procedures, Multiuse RT (e.g. for rhizotomy) or with EndoLIF® and Percusys® for minimally invasive endoscopic assisted stabilizations proven endoscopic systems are provided that together cover a whole variety of indications. Whether herniated disc, stenosis, pain therapy or spinal stabilization treatment – surgeons operate through small incisions under local or full anaesthetic via tissue and muscle sparing corridors through natural openings into the spinal canal (e.g. intervertebral foramen, the “Kambin triangle”).
Press Contact:
joimax® GmbH
Sabine Jarosch
sabine.jarosch@joimax.com 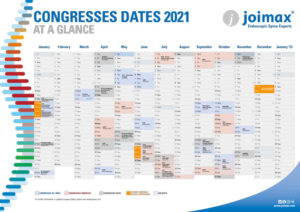